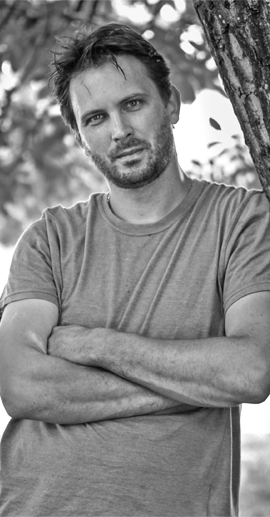 Hrvoje Ivančić is a writer and traveler, reporter and documentary filmmaker. He is the author of the travelogue “Danube Blues”, for which he received the Rikard Jorgovanić Literary Award. He wrote the travel novel “Samsara – The Road to the East”, a collection of short stories inspired by long journeys to the Middle East – “Za’atar”, a travelogue from Africa “Behind the Mountains of the Moon”.

He is the author of newspaper reports on social, war, political and cultural topics that combine humanism and adventure, promote education and encourage learning about different cultures. He has written from Uganda, Congo, South Sudan, India, Pakistan, Syria, Croatia and Europe. He made the series “Road to Kathmandu”, a documentary from Uganda with the theme of fair trade system called “Pearl by Pearl”, a documentary from war-torn Syria “Syria – a country at a crossroads”, a documentary from the turbulent region in the east D.R. Congo, “North Kivu – the forgotten heart of Africa”.

He published reports in Croatian newspapers and electronic media. Some of them are: Globus, Večernji list, Jutarnji list, H-alter, Tree of Knowledge, Meridians, Croatian Traveler, Turist plus, Rolling Stone, Playboy, T-portal. Short stories were published in literary magazines: Articulations, Phantom of Freedom, Entefktirio, Strane. Some stories have been translated into English, German, Polish, Greek and Italian. He is a permanent contributor to the Lupiga portal and the Croatian Radio and Television.

The feature-length documentary radio drama entitled “First I am a man, and only then I am a Roma”, tells about the life of Roma in Međimurje. He recorded and did a travelogue from a trip to the Congo.

As a lecturer, he was a guest in colleges, primary and secondary schools, at the Faculty of Political Science in Zagreb and at the faculties of humanities and social sciences in Zagreb, Rijeka and Zadar.

Ever since his college days and history studies, he has traveled extensively in the Middle East, Central and East Africa, and Southeast Asia.

He won the Dijana Klarić Award for a report from Congo, The Forgotten Heart of Africa. Winner of the “FIJET Tolerance” award given by the Association of Journalists in Tourism, which awards travel writers who write about other countries, peoples, cultures and encourage empathy, solidarity, and who through their reports discover unknown worlds and endangered individuals, groups and events. He entered the shortlist of the regional competition “Spasimo putopis” 2021. (Save the travelogue). He is the winner of the “Fra Ma Fu” award for the best reportage in 2021 under the title “Theirs and Ours: The Vicious Circle of the Largest Ghetto in Croatia”, which was published on the Lupiga portal.